In 1982, a police force was formed.  Five officers patrolled the three streets.  Little by little, the Borough of Legoland began to grow.  In 1985, a second firehouse was built, a ladder truck purchased, along with an engine and two utility vehicles.  The Borough of Legoland purchased additional undeveloped land from the City of Legoland, becoming six times its size.   In 1986, a second police station was built and additional officers were hired, bringing the total police force to 17.  Shell oil, moved into town opening up a service station.  A new Delivery Center moved in, as well as a Cargo Center.

In 1987, a telegraph fire alarm system consisting of 6 fire alarm boxes, was installed.  Also, a small jet airport was built on the northeast corner of town.

In 1988, the Borough of Legoland purchased three additional pumpers as well as another ladder truck and a tiller.  More and more companies moved into town, brining in more and more minifigs.

In 1998, the City of Legoland's municipal government collapsed.  Crime began to overrun the city and spread to both communities.  Soon, the resort economy collapsed.  Motels closed up.  Minifigs moved away.  The town councils were unable to handle the emergency and the two towns became run down.  Crime began to hit the streets.  Cars were stolen:

Gangs began to move in and created havoc to the residents. 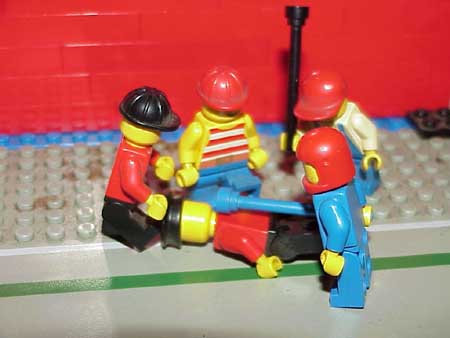 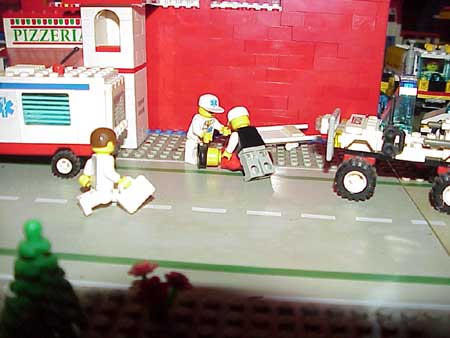 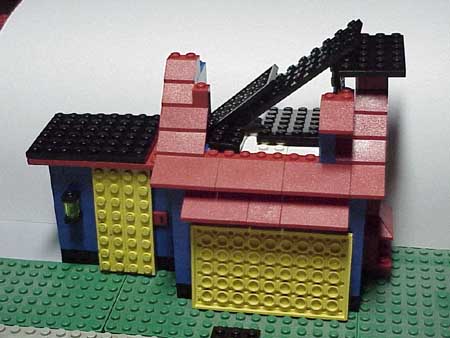 and people began to move out of the two towns and away from the area.  The two towns eventually became desolate.  Eventually, both fire departments lost their membership and was shut down.  There was not enough money to have a paid fire department.  Thus, neighboring communities would be called.

Finally, in late January of 2001, two former town firefighters sat down and decided that the two would rebuild the town, and make it more than just a run down seaside resort. "It would become one town, and an all year round safe place to live.  It will be the type of town that you can raise your children in, while keeping your doors unlocked all night long.  It will be the place where outsiders can come on vacation, yet be treated with kindness and politeness.  It will be the type of town that allows for fun, but keeps the people in line.  This is what it was and what it will be once again.  This is Lego® Township!"

With that being said, the two shook hands and went to town.  Since the town was deserted, they sought the help of the State to incorporate Lego® Township, and dissolve the town's form of government.  Upon the State's approval, cleanup and reorganization began.  With the help of outside agencies, such as the State and County Police Departments, the streets were ridded of all the crack houses, prostitution, and other illegal activities. 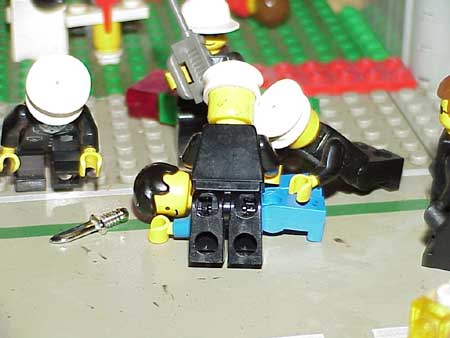 Burned out buildings were leveled, and the land cleared.  A new government was formed.  Lego® Township was created on July 1, 2002.  The Police and Fire Departments were reorganized, with the Fire Department as the lead organization.  The airport was reopened, businesses, such as Freight Express moved into town.  Financial support came from Lego® National Bank, grants from the State, and investors looking to buy land down the shore.  All this allowed houses to be built.  It also allowed the beaches to be cleaned.  Roads were dug up, new water and sewer lines were installed, and then roads repaved.  Sidewalks were dug up and repaired.  Trees were planted.  Lego® Township was born.

The population of Lego® Twp. is now up to 60,000 year-long residents. Families are continuing to move to Lego® Twp. in very large numbers.  As word of mouth spreads as to the paradise-like atmosphere, more and more people are becoming attracted to Lego® Twp and move here.  Houses in some developments are selling out quite rapidly.  With this influx, the population reached 80,000 year-long residents!  This past summer, the population averaged 100,000 people.  We expect to have close to 110,000 by next summer as improvements continue throughout town!  Lego® Twp is approximately 23 square miles, 20 developed land, with another 3 undeveloped.