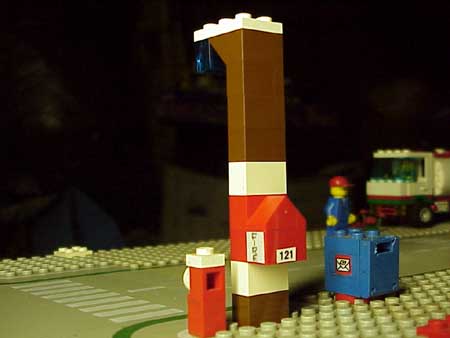 Lego® Township has a Telegraph Municipal Fire Alarm Box system throughout town. The system is maintained on a part-time basis by three Township career firefighters.  The system currently has 270 Three-Fold Boxes throughout town, 196 of which are street boxes and 74 are master boxes.  There are currently 3 alarm circuits and 14 box circuits throughout town. Master boxes are indicated by a 6 in the second digit of the box number.  The first number in the box indicates what battalion the box is located., except for boxes beginning with 5.  These boxes are Township buildings.   There is a small training circuit on the grounds of the Fire Academy that is not tied into the Township system.  More boxes continue to be added.  For a list of boxes, click on the link below:

I have a cell phone as well as a lot of people I see walking down the street.  Everyone has a phone in their house.  Why bother with these outdated boxes?

Cell phone batteries die.  Signals are sometimes strong or weak.  When you dial 9-1-1 on a cell phone, you may not get the town that emergency is located.  If you do get the proper town, do you know exactly where you are?  Remember, if you don't know the town well, you could delay getting help where it is needed.  If you have a heavy accent, or are located in a spotty area with your cell phone, it could be hard to understand you.  In regard to phones in your home, keep in mind that most phone wires are in the walls.  Fires can be in the walls as well.  Fire will burn through your phone wires.  If your house is on fire, get out FIRST!  Call 9-1-1 from your neighbor's house.  Better yet, go to the nearby fire box.  All  you do is activate the box and stay there.  The fire department will respond to that box.  Then you can direct them to the fire.  It IS the BEST way to report a fire.

Are the boxes easy to use?

Yes.  The instructions are on each box.  Just pull down the white door, and then pull down the hook once.  Then wait for the Fire Department and direct them to where the fire is located.

What if I'm in an area of town and need to report a fire, my cell phone is not working, and I do not have a list?  What do I do?

There's two answers to this.  One, if its daytime, look for the white, red, white stripe pattern on the telephone poles.  A fire box is there.  Two, if its night time, look for a blue light suspended about 10-15 feet in the air.  The blue light indicates that there is a fire box there.

What's that noise and why does it sound all the time?

® Township Fire Department is a full career department, the Gamewell fire horn system will sound anytime a box is pulled or activated from dispatch in Fire Headquarters, both as a secondary means of dispatch and as per National Fire Alarm Code 72 Ch 6-5.3.  The horn also sounds everyday at 17:00 hrs, as a test of the alarm system.  Each firehouse has a diaphone.  Below are pictures of the diaphones at each firehouse.

Lego® Township is approximately 23 square miles.  There are different kinds of terrain, ranging from the shore to the hilly areas of town with a couple of valleys.  Although Lego® Township has a state-of-the-art radio system, there is always that concern that the system may fail or may not reach a mobile unit.  We need to be sure that the fire units will hear the call so they may be able to help you.  So, the horns are sounded in addition to the radio dispatch.   In addition, this will let you, the public, know that there is an emergency in town and that the Fire Department may be coming your way.  Hopefully, people heed that warning and when they do hear a fire truck, they will pull out of the was immediately.  There is no better feeling in the world than to hear the diaphones sounding when you need help, because you now know that help is on the way.  Also, I can not tell you about the number of times those diaphones woke up people to find that it is their home that is on fire.  Thus, we firmly believe in its use in today's technological world.  It is a public safety device and will sound 24 hours a day, 7 days a week.  The only time these horns will not sound is if they are in need of repair.

Do the horn blast pattern mean anything?

Yes!  The horns will sound a certain code depending on where the fire is located.  The fire boxes in town are hooked up to the horns.  So, for example, when Box 535 is pulled, the horns will blast 5 times, pause, 3 times, pause and then 5 times. It will do that 4 times (or, 4 rounds).  When a telephone call is placed to Fire HQ and Fire HQ "taps" out the horns, it will cycle only 1 round of the box number.  During radio failure, the boxes will be manually  transmitted 3 rounds.  In each firehouse is a list of the boxes.  So, when you hear Box 535, that means that the fire alarm box at Fairview School was activated.

Fire Signal 1 is a 2005 International bucket truck.  The truck has a hydraulic boom with 120VDC electric at the bucket to hook up any electric tools.  The bucket has a 350 pound load with outriggers to support the bucket at a 5 degree angle below grade.

OW DOES THE SYSTEM WORK?   The fire boxes operate using telegraph lines. Rather than having short beeps and long beeps in a series to type out letter, a fire box "taps" out the number on the fire box, corresponding to a code wheel within the fire box.  What happens is this:  The entire wired fire alarm system circuit is normally a closed circuit, meaning that electricity flows through the system without any interruptions.  When the box is activated, it causes a series of "opens" or taps in the pattern of the box number.

A municipal fire alarm box, such as the style used by Lego® Twp and most other municipalities, has a "cottage style" appearance.  That is, it looks somewhat like a cottage house.  Inside the fire alarm box is a spring-wound clockwork mechanism which transmits four "rounds" of a different identifying code for each location.  This code is cut into a removable code wheel, which is driven by the mechanism.  On the mechanism is a striker which rides along the code wheel.  The code wheel has a series of notches which correspond to the alarm box number.  When the fire alarm box is activated, the code wheel starts to spin.  The striker rides each notch and falls in a valley between each notch. On the back of the striker is a chock which pushes a contact against another contact, completing the circuit.  When the striker falls in a gap, the chock can no longer push the one contact.  The contact then separates from the other contact and breaks the flow of electricity causing an open circuit, which in turn creates a single "tap."   See picture below. 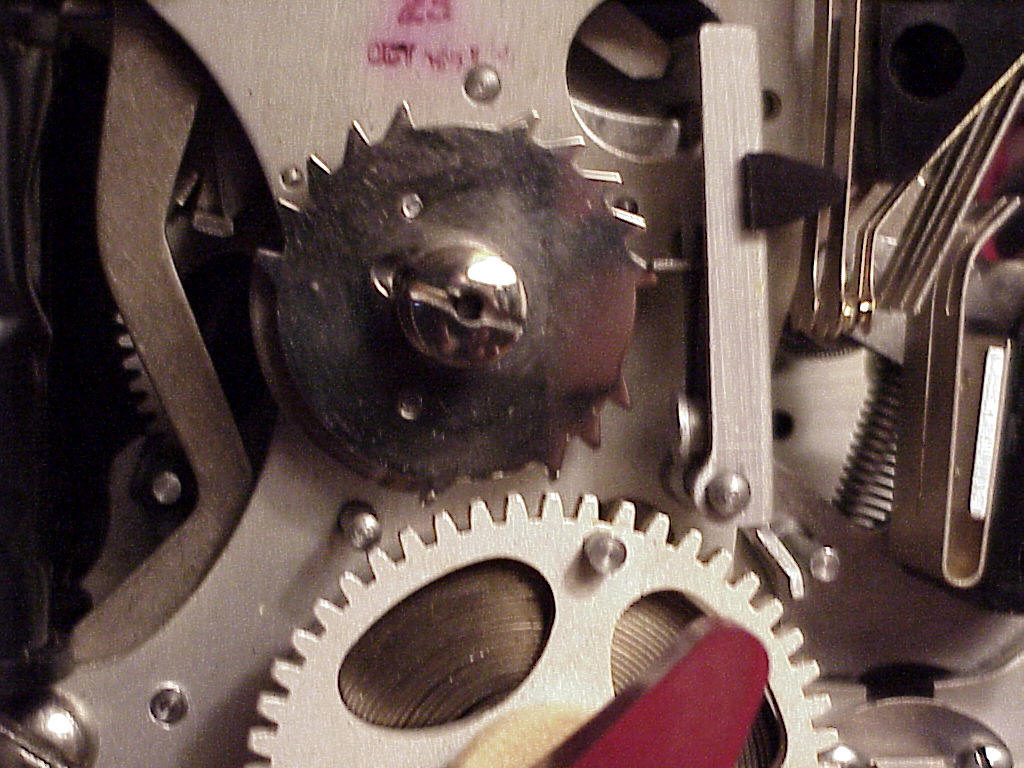 For example, let's say that fire alarm box 341 is activated.  The code wheel in the box will have three notches, a slightly longer valley after the third notch, four notches with a slightly longer valley, then one notch, with a long valley.  The slightly longer valley shows the separation between numbers.  The long valley indicates the end of the round, which indicates the box number.  So, when box 341 is "pulled" there will be 3 taps, a pause, 4 taps, a pause, then 1 tap.   The process will then repeat itself 3 more times before stopping. This signal is transmitted through the circuit to the form 4, digitizer and the fire stations.   Inside each fire station is a "punch register."  This punch register has a cash register type paper tape which has holes punched through it for each tap transmitted.  Using box 341 as an example, the box will tap out the code on the tape.  If box 341 was pulled, it would look like this on the tape:

At each firehouse and the dispatch center is a listing of boxes.  Each box has its own unique location.  So if box 341 came in, the listing would indicate that Box 341 is at Fairfield Terrace & Laurel Place.  Obviously, box 341 for another town would be a different location.  Below is an old box list and alarm gong at Station 6.

***PLEASE, PLEASE, PLEASE***  If you live in a town that has these boxes, please do not place signs, banners, or anything over either the box or the striping showing where a box is.  The pole is painted to show where a fire box is located.  It is not to be used for a backdrop for signs or anything else.  When people are in a panic, they may not see the striping due to an obstructed view like a garage sale sign or something.

ALSO, DO NOT PULL A FIRE ALARM BOX MALICIOUSLY!!!  IT IS A SERIOUS OFFENSE!!!  YOU CAN SERIOUSLY HURT SOMEONE, SUCH AS THE FIREFIGHTERS RESPONDING TO THE FALSE ALARM.  AT THE SAME TIME, THERE COULD BE A REAL FIRE ELSEWHERE IN TOWN!!!  BY CAUSING THE FALSE ALARM, YOU WILL CAUSE A DELAY IN THE FD'S RESPONSE TO A REAL FIRE, WHICH MAY CAUSE LIFE TO BE LOST.

The Gamewell Company and Digitize, Inc do not endorse this site, to visit their site, click on their respective names.

Also, if you are a fan of Gamewell Diaphones, Click here.  I stumbled upon a site about the Diaphones, including a handful of audio files, when I had the idea of putting fire horn blasts on this page.  By the way, the blasts heard as you open this page is the Gamewell Diaphone on top of the Borough Hall in Rutherford, NJ.  It was tested in January 2003, the first time it was sounded in about 6 years!